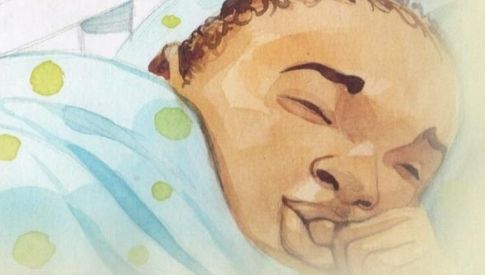 Before Miquilaue Young published her book “Mama Says Homebirth,” there weren’t too many children’s books about home birth, let alone a children’s book featuring diverse depictions of families having home births. Now parents and children can learn more about the option of home birth and how midwives support families in their unique roles.

Originally from Newport Beach, CA, self-published author Miquilaue Young is mother to seven children who she homeschools with her husband. Miquilaue has a Bachelor of Social Work from Azusa Pacific University in Azusa, California, and a master’s degree in African American Studies from UCLA in Los Angeles, California. Miquilaue had six home births herself and says she knew from a very young age that she wanted to continue the legacy of home birth in her family and have a midwife support her during pregnancy and childbirth.

Miquilaue says that popular views of different birthing options have changed over time. “My grandma talks to me about the reasons she chose to give birth in a hospital,” she says. “At the time, in the early 60’s when my uncle was born, it was a status thing. So if you were up and coming then you’d give birth in a hospital and giving birth at home was seen as moving backwards,” she says. “If you were African-American and were still having home births, some people assumed it was because you were poor and couldn’t afford to go to the hospital.”

In some cases, Miquilaue says midwives were purposefully excluded from care despite the benefits they can provide to families. “I think that the agenda that aimed to eradicate grand midwives and introduce hospital births was pretty successful, so now I think it’s just seen as what you do when you have a baby, unless you were a hippie,” she says. “Hippies kind of kept home births going, but outside of that, hospital births became the norm and people put all of their trust into the medical care system without doing so much research.” Miquilaue believes that awareness and education can help more women avoid unnecessary interventions. “I think most people still think ‘Oh, I’ll go see my doctor and maybe more interventions could be prevented if women understood the natural process that happens in their bodies and letting it run the natural course.”

When Miquilaue became pregnant in 2008 home births weren’t legal in the state of Missouri at the time. She was checking out any books about midwifery that she could find. “I was trying to do all the reading that I could to understand what was happening to my body because nobody that I knew had had a home birth,” she says. “There was one doctor who did home births and right before I went into labor he passed away.” In 2009 home births became legal, so she would actually meet her midwife in labor.

“As I’ve continued to have more pregnancies, I saw that there were no books about home birth that I could use to introduce it to my children,” she says. “The few that were there weren’t very diverse and as long as I’ve been looking, there haven’t been any diverse books for children based around home birth.

“I just felt like it was something that was necessary for my children to be able to see themselves that way, and this is something that they were living pretty much every two years, but there were no books that showed it to them,” she says. This was part of the reason that Miquilaue feels it’s important for young people to learn about home birth and the role of midwives in communities. “I also felt that it was important for the legacy of homebirth and for them to know that this is a legacy in our family and I wanted them to be able to see that in picture form” she adds.

“I was looking for something very specific for the illustrations. I wanted my characters to be realistic and not cartoon-like, so I was able to find an illustrator that I felt met that. Chase Walker is from Liberia and also spent time in Ghana. “I really felt like he could capture an African-American type feel to the characters he created and he captured them perfectly.”

Miquilaue says that she wanted her characters to seem more realistic because of the very real experience of home birth. “It’s very real to me and I wanted it to seem real to the parents and children,” she says.

Miquilaue explains that it’s been a joy to share the book with her family and that her kids  appreciate the story. “We usually sit down and eat dinner together as a family, so after dinner I was able to sit down and read it to them and my children range from ages one to 13, and I think they all loved it and it was also nice to know that it resonated with a teenager,” she says.

I wanted it to seem real to parents and children

The Legacy of Home Birth

Miquilaue emphasizes the importance of passing on a legacy of home birth and feels that mothers can greatly benefit from learning more about their birth options. “The state of maternal mortality in a hospital setting is atrocious, especially for minorities, so it’s really important for me to kind of plant that seed in children now so they know that there’s an option to have a baby at home with an amazing midwife who takes care of the mom and the baby, and she comes back to see her the next day and next week.”

Miquilaue also explains that the way many people think about birth and recovery might not be what’s best for the mother and that more time and postpartum care can help mothers heal.  “Those things are so important and I don’t think we necessarily value that in our society. We should consider that a mom has just given birth to a baby and has this wound inside her that needs to heal,” she says.

“Right now it’s all about ‘bounce back,’ and something about being with a midwife who can help show you that this is a sacred experience and one that you need to take your time with. I just think that it’s important to depict that so people are aware of a certain process that should happen that ‘maybe I should consider.’” Miquilaue also had her book translated to Spanish, “Mamá Dice Parto en Casa.”

Miquilaue mentioned that she has more books that she aspires to write. She says she plans to write a chapter book about home birth that she hopes will reach teenagers and young adults by introducing parts of her experiences and family history.

Miquilaue says she’s also planning to write more children books on topics relating to birth and motherhood, including a 40-day postpartum period she says can really benefit mothers. “It’s not very common, but I’ve usually stayed home for 40 days after giving birth so that I can heal. It’s something that a lot of cultures have done in the past, but it’s kind of gone away,” she says. “I think it’s what contributes to postpartum depression and a lot of unnecessary anxiety.”

With more families exploring home birth and seeking the services of midwives since the start of the COVID-19 pandemic, Miquilaue explains that part of the impact seems to be that families and the health community sees home birth as a more acceptable option. “For people who have never considered it in the past, with the pandemic, people are more open to the possibility of giving birth at home and you even see some traditional medical fields giving the green light to people changing their birth plan,” she says. “Hopefully that’s kind of the opening to the doorway to legalizing home births in all the states.”

Sarah and Matthew Bivens created the ‘Doing it at Home’ podcast to give people the opportunity to hear real conversations about pregnancy and birth so they feel empowered to make the birth decisions that are most aligned with them, wherever the birth takes place…