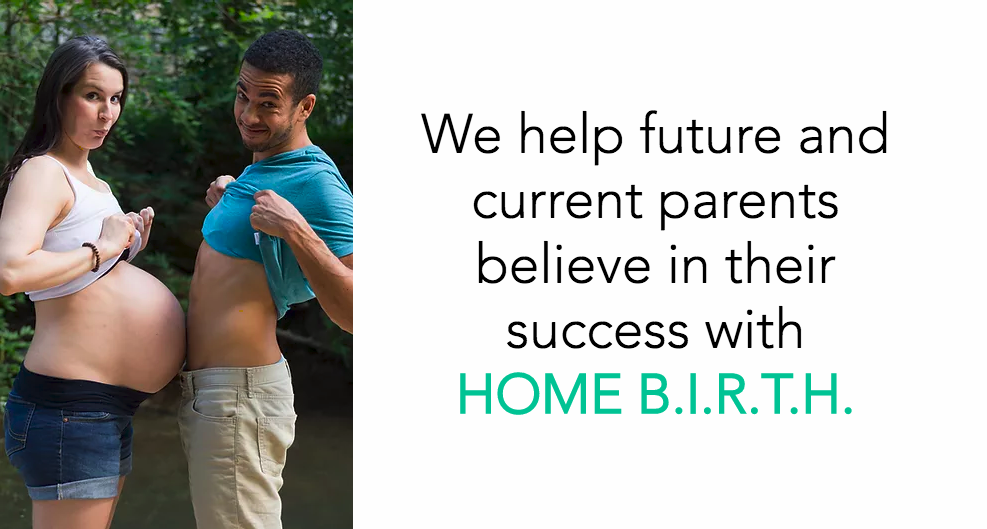 A theme that is central to the process of pregnancy, birth and parenthood is having the confidence to make important decisions for your family and knowing where to go to find helpful information and support. Sarah and Matthew Bivens created the ‘Doing it at Home’ podcast to give people the opportunity to hear real conversations about pregnancy and birth so they feel empowered to make the birth decisions that are most aligned with them, wherever the birth takes place. They aim to “serve and share the home b.i.r.t.h. mindset,” which stands for beliefs, intuition, resources, team, and health.

On their podcast, Matthew and Sarah talk about their own personal experiences and hear intimate stories from their guests that lead to insightful conversations about birth family, relationships and the human experience.

Matthew and Sarah met while working together and say they always planned to work together again on something they both care about. “We work really well together, and after we got married and started a family, we wanted to get into another project together and ‘Doing it at Home’ really brought together a beautiful synergy of what we’re passionate about and what we’re already skilled at,” Matthew says.

The two of them have grown their passion project over four years and in that time have sought to provide families with information and resources. “We wanted to create something that we would have liked to have had, and we were kind of our own audience to start. Then we got the idea of interviewing other parents and that’s when it really took off,” Matthew says.

Now there are more midwives, doulas and other birth professionals who decided to start practicing as a result of listening to the show. “To have any part in that is truly humbling,” Sarah says.

Many of their guests on the show are long-time fans who are excited to share their story as a way of giving back to a community that gave them something valuable in an important time. “We speak to women who listen to every episode or while birthing up until the moment of birth and so for them to come onto the show and share is such an amazing experience for everyone and I think it’s that energy that makes the show really outstanding,” Sarah says.

Sarah recalls their very first podcast conversation with another family and details how they were set up in a small workspace in their home fitting in the podcast episode while their two-month old was fast asleep. She says once they shared their story, a lot of other families started reaching out to them who were interested in sharing their own birth story.

“It served so many purposes like connecting with other people who were making this decision and hearing that people were making this choice all over the world at different ages and with different family setups and people of all walks of life making this choice so it was incredibly enlightening and enriching on a personal level,” she says. “We really support people empowering and informing themselves and making informed and empowered and supported decisions”

Your Family Empowered by Choice

Like many parents, Sarah and Matthew wondered whether they were making the right decision for their family and were confronted with resistance and judgement when they decided to share their decision, but that looking into different resources and getting more intimate looks at birth helped them find the right plan. “We chose to share and we got mixed reviews,” Sarah says. “Some sides of the family were totally on board, and others not so much, and that just gave us an opportunity to look at our own confidence in our choice.”

“We listened to different podcasts and watched different documentaries and actually watched home births, and all of those things went a long way with me as far as embracing home birth as an option,” Matthew says.

Many people’s perception of birth as a medical emergency is shaped by depictions in popular media and Matthew says one of the most impactful parts of his discovery process and learning about birth was hearing people talk about birth in a different way. “I was so used to birth being a traumatic event and being a medical emergency that was scary and loud and messy because that’s how it’s depicted on TV and in movies all the time,” he says. “That’s why I had all of these fears that came from what I had seen and it was always treated as an emergency.”

One of the main concerns families face when exploring home birth is how their decision will be received by their community. Sarah and Matthew agree that managing those conversations and being selective about who families have with them is a skill that will benefit them as they pursue their ideal birth plan.

Matthew explains that one thing expectant parents should keep in mind during pregnancy is the value of protecting their space and being selective about who they let influence that space so parents can maintain a positive mindset throughout pregnancy and birth.

“One of the birth courses we took talked about protecting your bubble,” he says. “You’ve got to protect the energy and space around you and if you’re sharing with somebody that you’re choosing a home birth and that just opens them up to dumping their fears and judgments on you, that could influence how you’re feeling in the moment.”

A unique insight that families can also take away from the personal conversations that happen on ‘Doing it at Home’ is that families can still have a beautiful experience not because everything went according to plan but because they felt comfortable and confident throughout the experience.

They say communication, information and an open mind were key in helping them remain confident while changing their birthing plans and having that conversation with their OB/GYN. “You can still ask questions with respect and not try to diminish their position. That was our experience with OB we worked with for the first trimester,” Matthew says.

He also explains that part of their process of exploring the right birth plan for them involved bringing a list of things they hoped to include as a part of the pregnancy and birth experience to their OB/GYN. The list included things like not being hooked up to machines, being able to move around freely and the ability to eat or drink.

“So we went through the list with him and he said ‘yes’ or ‘no’ and most of them were no, but we had that conversation of trying to understand one another and eventually brought up home birth and even though we didn’t agree, because of the way we approached it, he respected it and we respected his decision,” Matthew says. Sarah agrees that the process of learning about their choices and having some of those conversations helped her relate and understand others despite differences in points of view.

“One of the biggest lessons I got out of that experience was the ability to understand without agreeing.” she says. “Maybe we don’t agree, but I can understand why you move the way you do, or make the choices you make and I think that served me through pregnancy and parenthood and as a human being.”

In many ways, ‘Doing it at Home’ has become a way to help people have those tough conversations with friends, family and potentially their OB/GYNs and Sarah and Matthew say they hope hearing those conversations from someone who was also figuring it out for the first time will give people the confidence to see their plan through. “We know that people aren’t always so understanding and willing to listen but there are things that affect the outcome of those conversations and being able to advocate for yourself and know what you want and don’t want,” he says.

whatever that scary thing is in front you, you can do it.

Now, Matthew and Sarah are introducing new ways for families to learn about birth, relationships, parenthood and more through a new book that features a combination of their experiences and story and insights that can serve as a guide for future home birthing parents who want to learn more and know what to expect.

The book started out with Sarah pouring thoughts and ideas onto paper in local coffee shops and now is completed and in the process of being self-published. Sarah says the book will serve as an extension of the show providing a different medium.

“I think stepping into that space and broadening what you know to be the truth and being willing to try out new beliefs and have your mind changed—I think all of that is beautiful. Even if you already know that you’re going to give birth at a hospital, it might open you up to a whole new world of options within the hospital. If you’re choosing at home, or the hospital there’s still so many possibilities out there.”

Heather Gallagher on Birth, Death and Everything in Between